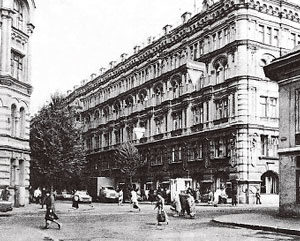 Guest rooms “Idillia” is located in a house located on the corner of Kuznechny lane and Pushkinskaya street. The house was built in 1874.
The first owner of the house was Colonel of the life guards of Izmailovo regiment P. I. Roth. At his request, the architect A.V. Ivanov designed the building for use as a hotel. By the way, the same architect designed the hotel “Balchug” and “national” in Moscow.

The merchant S. S. Davidovich was appointed manager of the hotel.

The part of the house facing Pushkin street was a hotel (then still without a name), typical for our time-long corridors, on both sides of which there were rooms.

The main wing of the house on Kuznechny lane (where the guest rooms “Idillia”are now located) was to be used as a house of expensive furnished apartments consisting of 5-9 rooms, a kitchen with a glacier, a bathroom, 1-2 bathrooms, a room for servants and households rooms.

S. S. Davidovich was a bad leader, more concerned about his pocket than about the General benefit, and in 1878 the house had to be sold. It is bought by Baroness Louise Karlovna von Taube, who lives permanently in Paris, and calls her house of furnished rooms “Palais Royal”. The new owner by means of wide and interesting advertizing and by means of high acquaintances fills the house with notable lodgers, people of creative professions.

Merchant Davidovich still some time remains Director of “Palais-Royal”, but after big shortages in 1880 year was dismissed and, fearing prosecution for their financial machinations and knowing Palace ties family Taube, fled abroad.

The owners of the house changed several times, but with the light hand of Baroness Taube and, for interesting guests, “Palais Royal” acquires the glory of “shelter of St. Petersburg Bohemia” and “writers’ farmstead”.

Zinaida Gippius wrote : “on Pushkin street in St. Petersburg there was a huge … house-hotel… for some reason it was loved by writers and lived there, especially non-families, for months or even years.”

Fyodor Ivanovich Chaliapin : “… in the Palais Royal, life was interesting and fun.”

Young Vladimir Mayakovsky to mother and sisters: “My address: St. PETERSBURG, Pushkinskaya St., hotel “Palais Royal”.And-in different ways: “… send me the money here.”
Writers I. A. Bunin, A. I. Kuprin, artists I. I. Brodsky, I. I. Levitan and many others lived here.

In 1915, after the first year of First world war , rich and prosperous people moved to Petrograd away from the horrors of war. Boom “furnishings” began. The owners of the “Palais Royal” carried out a large renovation in the hotel with alterations of rooms. Cars and buses were bought to deliver guests from the city railway stations, and the hotel staff was trained. Now at the entrance to the hotel guests were greeted by 2 majestic porters and a luxurious vestibule with a fireplace and a stuffed bear. From the multi-lingual administrator desktop, porters carried guests’ belongings to their rooms. The Petrograd Newspapers wrote that the Palais Royal was in competition with the best hotels in the city…

By this time the furnished apartments in the wing on Kuznechny lane had also been converted by the last owner N. I. Agapitova into separate rooms and were rented, like hotel rooms, from one day to a year.

The 1916 and 1917 were successful and profitable for the furnished rooms and apartments of Petrograd, then the difficulties associated with the revolutionary events in the city begin…

In 1918, the hotel is raided by the red guards, the owners are constantly called to the Cheka. After the last forced visit to Gorokhovaya street, where N. I. Agapitova was kept for many hours, she fled to Finland with the help of a Finnish smuggler friend who often lived in her rooms. After the quarantine station Raivola (now Komarovo) her traces have got lost.

So sadly the 45 – year period of existence of the hotel “Palais Royal” ended .
After that the house becomes at first a hostel of railway workers, and then “the house with densely populated communal apartments” – to 15 rooms.

Fragments from the book of Professor L.V. Vlasov ” the Story of my life.”:

“In the great hall … there were two niches for cabinets. The kitchen had a roomy stove with an oven, “decorated” with many valves with a good hood. Refrigerator boxes were built into the windows. The 12-meter bathroom included: a “family bath” and a water heater with a metal wardrobe for drying clothes. A toilet with a toilet bowl decorated with flowers stood on a dais in front of a stained glass door.” ( All this disappeared without a trace after a major renovation of the house in 1956)
“…On March 16, 1940, the day of my 14th birthday, we heard loud cheers in the hall. From Vyborg came back our neighbor – cinematographer E. J. Uchitel ( a future famous director, n. a. Of the USSR). He, having received a small vacation, was constantly at home, which the three “apartment children” and took advantage of, attacking him with questions about the war.” ( On place room of E. J. Uchitel now No. 18 guest rooms ” Idillia»)

“…In our beautiful room, turned into a crypt – dark and freezing, grief came. Our ration cards, which my mother received in december, were stolen from her…It was a death verdict at the time, which she, swollen with dropsy, calmly said. However, there was an incident that cannot be explained. We were saved by a bag of lentils that had mysteriously found itself in the back of a bookcase. Then my mom thought of it during the evacuation, leaving us his wardrobe, put his father friends. We were surprised when they returned to Leningrad in 1946 and learned about this case, they called it mysticism, because they never bought lentils. After this incident, my mother, an active social activist, began to believe in God.”

Times are changing, and communal in the house gradually settled. In place of some of them since 2002 is a guests rooms “Idillia”. It is, of course, still inferior in scope to the “Palais Royal”, but life does not stand still… History has made its turn, and in the house originally built as a hotel, there was again a hotel.

The history of the house continues.